Analyzing sevens is not easy. Sevens lacks the familiar structure imposed by fifteens set piece and phase play. Matches are fast paced and chaotic. Listening to a team break down a sevens match often sounds like the disjointed recollections of crime scene witnesses.

This post introduces a notational system for tracking sevens performance that uses ball possession as the fundamental unit of analysis.  A possession is a scoring opportunity. It begins when a team takes ownership of the ball and ends with either a score, a turn over, or a referee’s stoppage due to time expiring. Possessions alternate between teams through the course of the match providing a convenient structure for notating sevens play.

Chess notation inspired the idea for tracking sevens performance this way. In chess notation players record the new location of a moved piece after each turn. Additional symbols denote move quality. Players note the new positions by turns until the game is won, drawn, or time expires. At the end of the match the notation completely describes the action.

This post demonstrates the method by example. It maps a sevens video clip to its corresponding notation. Every possession in the clip is notated and described to illustrate the system.

The clip is of the USA versus Fiji Cup-quarterfinal at the 2015 Scotland Sevens. An example notation for each possession appears below the clip along with a brief explanation. I added a possession counter so you can easily refer between the video and notation.

(0:07) FIJ takes possession of the ball off the opening restart. Our notation includes the following fields:

The two unused fields — denoted by commas — are optional notes on the possession’s origin and end.

FIJ’s first possession ends with a chip and chase down the left touch line.

(0:22) This is the first change of possession. It’s the second possession overall, as noted by the leading 2, and USA’s first possession. The possession count is equal at 1. The source was a kick and the possession ends with a poach.

We also have our first entry in the notes field. The possession ended when Pio Tuwai poached from the wrong side of the ruck at 0:30.

FIJ’s 2nd possession (3rd overall) ends in a try. The source of the possession was a poach. We note the try was converted.

I use a grid-based shorthand to specify the field regions where possession begins and ends. The regions are depicted in the diagram below.

This possession began in region 7 (the left hand channel between the 10m lines) and ended in region 14, between the 15m lines and the opponents 22. The region numbers are relative to the team in possession. Region 1 — from the goal line to the 22 and the sideline to the 15m, is always the left-hand corner nearest to the attacking team’s own goal line. IE — when the USA takes possession of the ball, region 1 would be transposed with region 15. 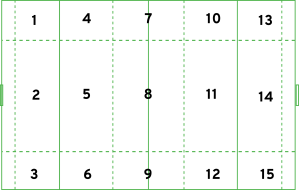 If we had an aerial view we could superimpose a coordinate grid over the field to note field position more accurately. But these regions are easy to identify and can be recorded quickly.

(0:52) After the try the pattern of alternating possessions is broken. Tuwai once again makes his presence felt by reclaiming a short restart. FIJ goes +2 in possession count (3-1) over the USA. The USA is fortunate that the possession ends with a Handling Error (HE) at 1:03 when FIJ uncharacteristically throws the ball to touch.

Side note — Tuwai’s failure to make Fiji’s Olympic 7s squad deprived the sporting world of a rare treat. Tuwai is Magic Johnson on the rugby pitch — a big man with vision and a gasp-inducing ability to deliver the ball in space.

(1:05) USA’s 2nd possession — and the 5th possession overall — begins with a line out following FIJ’s handling error. The possession ends with a stolen line out in region 7 after a penalty touch kick. This time the ref pings Kolinisau for side entry.

In some systems — including the system used by the IRB — possession increments every time a dead ball is returned to play. By their measure this single possession would count as two possessions. But in this system a possession continues through phases, set pieces, and penalties, whether the ball is live or dead. It can only end on a score, a turnover, or a referee’s stoppage.

(1:54) USA’s 3rd possession begins with a quick tap penalty in region 3. It ends a minute and a half later when Perry Baker is tackled to touch in region 13. The possession includes 6 phases and a scrum.

(3:12) FIJ’s 5th possession ends before it fully begins.  FIJ weathered the storm of USA’s sustained attack, but with less than a minute left in the half FIJ mishandled a line out deep in their own end.

(3:20) USA’s 4th possession starts with good field position. FIJ’s line out error was compounded by an accidental offside penalty that pushed their defense to the goal time.. Maka Unufe offloads to Hughes for a short field try off the resulting penalty play.

FIJ gained an extra possession by reclaiming the restart following their first try. And they would have been up two possessions (and protected their seven point lead to boot) had they executed their line out. In this notation system, reclaiming restarts and holding the first and last possession of the half are two sources of extra possession.

Possession margin alone does not tell the whole story. As we have seen with FIJ’s botched line out, not all possessions are equal. We use Possession Efficiency (PE) to measure how effective teams are with their scoring opportunities. PE is the ratio of scores to possessions. If a team scores with every possession they will have a PE of 1. USA scores their first try on their fourth possession for a PE of .25. FIJ scores once in 5 possessions for a PE of .20. By this measure, USA made better use of their scoring opportunities than FIJ.

Related statistics include Defensive efficiency — calculated by subtracting the opponents PE from 1 — and Points per possession, calculated by dividing points scored by the number of possessions.

Possession 9 concludes our example notation. Here is the complete notation for the first half:

And, as promised, here is a link to the complete data set.

This system — like the analogy between chess and rugby — is not perfect. Scoring a try lacks the finality of a checkmate (except in extra time!) so we are forced to stretch the chess analogy a bit further than originally intended. Notating a sevens match possession by possession is similar to notating a series of chess games. Each of the shorter games culminates with a score or referee’s stoppage.

And unlike chess notation, our sevens notation does not completely describe the state of the playing field at each turn. We lose the moments of individual brilliance that make sevens so enjoyable to watch. But I believe this is not a bug but a feature. Those moments of eye-popping athleticism are often all that is remembered by the people who watch, and thereby obscure our view of the underlying structure. But when we, like Renaissance anatomists, exhume a game for examination, we must concern ourselves only with what we can learn from the skeleton of the corpse, not with re-imagining the hair or eye color it had when living.

Information is unavoidably lost when we abstract complex human events to simpler representations. The information loss is only justified to the extent that the simplification leads to new insights. Future blog posts will share some of the ideas and insights I’ve gained by examining the messy, chaotic system of rugby sevens through the lens of individual possessions. I also hope that my readers (Hi Mom!) will explore the ideas presented here and find new insights by interacting with the data set directly.